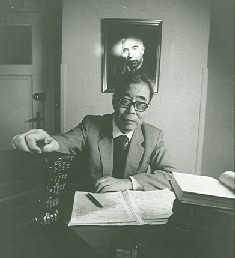 I regret to announce the sudden death on 29 December 2007 of Professor Ge Ge, who has made a heroic effort over the years to translate the Niels Bohr Collected Works into Chinese. In the process, he visited Copenhagen at several stages, most often with the support from the Daloon Foundation. During his visits he made several friends in Denmark, including my predecessor at the Niels Bohr Archive, Erik Rüdinger, and myself. His vast knowledge of Chinese culture combined with his straightforward manner was a unique learning experience for those who had the privilege to know him.
Professor Ge Ge was born on 22 January 1922 in Hebei Province, China. Having graduated from Beijing University in 1949 and from Qinghua University in 1952, he received his first appointment in Shandong Engineering College in 1952, where he concentrated on General Physics. Over the years he taught in subjects such as the Theory of Electromagnetic Fields, Theoretical Mechanics, Electrodynamics and Thermodynamics and Statistical Physics. 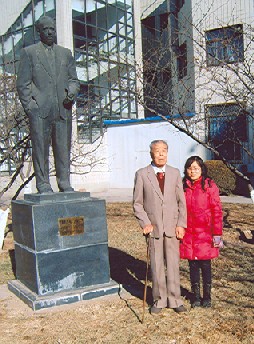 Professor Ge Ge and his assistant beside a statue of Niels Bohr, Bejing, 2006

In 1982 Professor Ge Ge joined the faculty of the Graduate School of the East China Petroleum Institute in Beijing (subsequently known as the China University of Petroleum) as professor of history of physics, an appointment which included supervision of graduate students in the field. He retired from the China University of Petroleum in 1991, but continued to trace historical developments of microphysics and philosophical problems in modern physics. Since 1980, Professor Ge Ge has written and translated a great number of articles and books in the history of physics in addition to his impressive effort to translate the Niels Bohr Collected Works, which must be regarded as his main contribution, spanning, as it did, a period of more than twenty years.

Whenever, as was most often the case, Professor Ge Ge's translation of a volume was completed long before the next volume in the series was published in Europe, he was not shy to prod the Niels Bohr Archive to move ahead in its efforts. In the years 1986-2001, he saw the publication in China of the first ten volumes of the series, and before his death he was able to translate the last two as well. An effort is currently being started to find a publisher for these two volumes.

Through his many translations and his research in physics, Professor Ge Ge has played an important role in making Danish science and culture known to the Chinese public. In 2001, he was presented with the Knight insignia of the Danish Order of the Dannebrog in recognition of his work.