Dania Achermann, “Glaciers as calendars: The practical and epistemic consequences of a concept in the twentieth century” 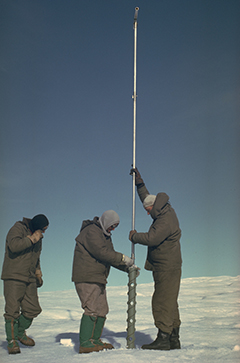 Today’s knowledge about global climate change heavily depends on the results of ice core research. However, until the mid-twentieth century, the study of glacial ice and the study of climate had little in common. How has the idea of glaciers as a climate archive evolved? And what were the consequences for both ice and climate research?

In the 1950s, Danish physicist Willi Dansgaard developed a method to identify the temperature of the atmosphere in precipitation. Hence, he concluded, it would also be possible to reconstruct the temperature of the past by studying old precipitation: glacial ice. At the same time, Swiss nuclear physicist Hans Oeschger developed a new radiation counter that enabled him to study the content of the air trapped in the tiny ice bubbles. Glaciological expeditions subsequently set out to find the oldest ice. By drilling deep into Polar glaciers and using their depth as an archive of Earth’s deep climate history, they began to reconstruct past climates layer by layer back in time. The proxy data retrieved from glaciers contributed crucially to a temporal and spatial expansion of climate history far beyond human time scales. However, the ice of interest was hidden deep down in ancient glaciers and hence hardly accessibly. Having access to an ice core was therefore scientific capital. Due to its inaccessibility and the high expenses of drilling expeditions, ice coring influenced the glaciological practice as well as the international and interdisciplinary cooperation. This presentation will investigate these consequences for the glaciological research practice as well as for the climate theories.

Dania Achermann is Senior Researcher at the research group “Environmental and Climate History” at the University of Bern (Switzerland) and PI of the project "Ice Cores, Small States and Global Climate Change: The rise of a new scientific discipline" funded by the Swiss National Science Foundation. For this project she is taking leave of absence from her position as Assistant Professor for History of Science and Technology at the University of Wuppertal (Germany). Her main field of interest is the history of atmospheric and climate sciences in the 20th century, history of ice and snow research, environmental history and environmental humanities.