Jahnavi Phalkey, "A History of Accelerator-Based Nuclear Physics in India (1938-1966)."

Instruments, accelerators in this case, can be seen as an archive of the aspirations, position and negotiations of their makers and users. They can effectively provide a tangible anchor to explore the scientific culture of the period in question. Accelerator-building activity in India began in 1940, and was carried out at various locations with varied trajectories. 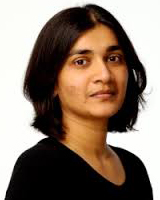 This talk will discuss four such facilities within the period from 1938-1966. The period is interesting because it lies at the intersection of India's transition from a colony to an independent nation-state, the rising international prominence of physics and nuclear physics, and the Second World War followed by the Cold War.

The history of physics laboratories and research in India is inextricably linked with institutions, instruments and people outside its boundaries, notably with North America and Western Europe.

Indian physicists, many of whom were trained in these countries, looked for ways to participate in research on the emerging frontiers of big science and also to enroll the support of their American and European counterparts in research and infrastructure building in India.