Aesthetics and the Limits of Quantum Physics

Physicists have often emphasized the beauty of theories and explanations. Such beauty is typically expressed in terms of simplicity and symmetry in the equations of the theory in question. But there is more to aesthetics in physics than beauty. Thus, a broader conception of aesthetics includes, for instance, the joy of insight and the notion of the sublime (related to, e.g., awe, wonder, and what may be beyond rational understanding). 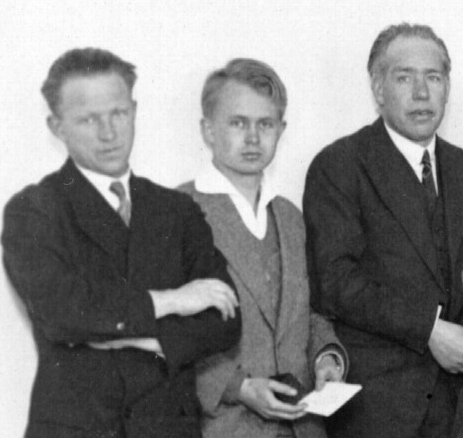 The multi-artist Piet Hein flanked by Werner Heisenberg and Niels Bohr in 1932 at the annual informal physics conference at the Institute where the play Copenhagen Faust was performed.

This project seeks to clarify the possible role of aesthetics in the development of quantum mechanics and its philosophical interpretation. The existing literature gives few but suggestive clues regarding the importance of aesthetic considerations of Niels Bohr and other pioneers of quantum theory. The project aims to consolidate these clues, in particular regarding the perceived limitations of quantum mechanics (associated, e.g., with the failure of classical physical pictures, Heisenberg’s uncertainty relations, and Schrödinger’s cat paradox). For instance, Bohr held that there is a limit to how far the quantum mechanical measurement process can be analyzed in causal and spatio-temporal terms, and he hinted at times that such limitations are associated with aesthetic value.

The project will also consider the extent to which aesthetics play a role in the motivation of physicists, and attempt to draw possible educational consequences regarding student motivation in physics.