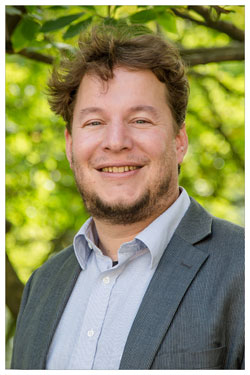 We are very happy to announce that the NBA board of directors has appointed Christian Joas as new director of NBA. Joas will start in the position on 1 September 2017. He was previously Assistant Professor in the History of Science at the Historical Seminar of Ludwig-Maximilians-Universität München, Germany.

Joas received a doctorate in physics from Freie Universität Berlin in 2007, and has worked as Postdoctoral Research Fellow at the Max Planck Institute for the History of Science (2007–2009) and as Research Scholar at the Fritz Haber Institute of the Max Planck Society (2009–2012). From 2015 to 2016, he was Postdoctoral Research Fellow at NBA with support from the Novo Nordisk Foundation. Joas has substantial experience with archival research and as a teacher. He has published extensively in the history of physics, notably on quantum mechanics and solid state physics.

The former NBA director, Finn Aaserud, who has served in the position since 1989, has decided to retire, yet Aaserud and Joas will overlap for three months after the new appointment in order to ensure continuity. We welcome Christian Joas and look forward to his continuing the development of NBA during exciting times, both as an international research center and as an outreach institution.