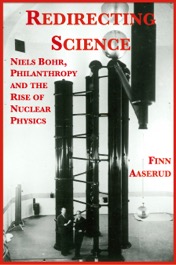 Finn Aaserud's book Redirecting Science: Niels Bohr, Philanthropy, and the Rise of Nuclear Physics, which first appeared in 1990 with Cambridge University Press, has recently been published as an e-book with Plunkett Lake Press.

After serving as the Director of the Niels Bohr Archive (NBA) for almost thirty years, Finn Aaserud since 2017 is Director Emeritus at NBA. He holds a Ph.D. in physics from the University of Oslo and a Ph.D. in the history of science from Johns Hopkins University.

In his review of the 1990 version for Centaurus, historian of science Helge Kragh states:

“Redirecting Science is the history of Bohr’s institute during the 1930s when it experienced a drastic change in its research priorities, from a laissez-faire mode of work and lack of clearly defined research programme to a concerted research effort in nuclear physics and experimental biology... Aaserud gives a highly interesting account of the interaction between physics and biology... Aaserud’s carefully documented work is an excellent example of how institutional history may transcend social and institutional limitations and integrate also conceptual history of science.”