Michael Stöltzner, “The Specter of Copenhagen Positivism: Bohr and the Logical Empiricists 1936” 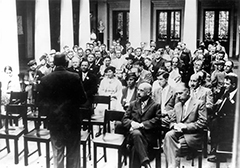 Participants of the Second International Congress for the Unity of Science in 1936 at the Carlsberg Honorary Residence in Copenhagen.

While the movement of Logical Empiricism emerged from within the debates about modern logic and relativity theory, quantum theory had not been among its primary concerns until the 1930s. What prompted the Logical Empiricists eventually to address it more substantively were debates that, to their mind, took an increasingly metaphysical twist. Even physicists had interpreted the new theory as a sign of the limits of scientific knowledge or a return of spontaneity into the foundations of nature. Such tendencies had to be combatted by a suitable interpretation of Bohr’s concept of complementarity, an analysis of ‘measurement’ and ‘observable’, and an embedding of quantum indeterminism into the tradition of statistical physics. Or such was the objective set for the 1936 Copenhagen Congress for the Unity of Science that was opened in Bohr’s house. This association has often been taken to indicate that Logical Empiricists advocated a positivism in the style of Heisenberg’s writings. But such an understanding neglects the plurality of views within the movement and introduces a criterion of meaning that was disputed by most, despite its alleged promise to bar metaphysics.