Thiago Hartz, “Unitarity, ghosts, and the role of mathematics: A history of quantum gravity from 1950 to 1967” 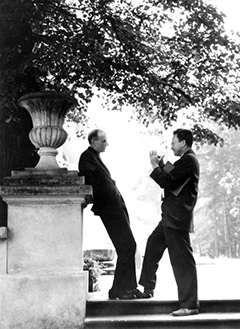 Paul Dirac and Richard Feynman in 1962 at Jablonna, Poland.

In the late 1940s, when renormalization methods were successfully applied in quantum electrodynamics, the community of quantum field theorists split into two groups. One group wanted to find a more solid ground for the theory, while the other group began to apply those new methods to other interactions, e.g., the nuclear and the gravitational ones. The latter group expected that these interactions could be handled with similar methods, however in the 1950s and 1960s such an expectation was frustrated. The gravitational field was particularly problematic, since it led to a non-unitary S-matrix, as Richard Feynman discovered in 1962.

In this talk I will present a history of some quantum theories of the gravitational field from 1950 to 1967, emphasizing in particular the works of the American physicists Richard Feynman (1918–1988) and Bryce DeWitt (1923–2004) and the Soviet physicists Ludwig Faddeev (1934–2017) and Victor Popov (1937–1994). I will explain their research projects and their main results—in particular the discovery, due to these four physicists, that, in order to restore the S-matrix unitarity, one must incorporate in the theory a new field, which is nowadays known as the Faddeev-Popov ghost. I will conclude with an epistemological reflection about the strategies for theory selection and about the role of mathematics in physics.

Thiago Hartz (born 1986) is Assistant Professor of History of Mathematics at the Federal University of Rio de Janeiro, Brazil. He received his PhD in History of Science (2013) from the Federal University of Bahia, Brazil, under Professor Olival Freire Jr. He was a postdoctoral researcher at the Niels Bohr Archive in 2013–2015. His current research concerns the history of quantum field theory from 1930 to 1970.