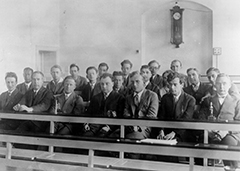 The 1930 Copenhagen Conference in Auditorium A at Niels Bohr's Institute for Theoretical Physics.

At the 1973 Solvay meeting on neutron stars, Léon Rosenfeld remarked that on the evening in February 1932 after Chadwick's letter to Bohr announcing the discovery of the neutron arrived in Copenhagen, Landau invented the idea of neutron stars. This story has become the universal founding narrative for neutron stars.

In fact, nothing Rosenfeld recounted was true—oh, the perils of oral history—and yet at the same time his recollection has proven a good guide to the actual history of Landau's involvement in astrophysics and the development of neutron stars. This seminar will trace the little known history in full, which Chris Pethick, Dima Yakolev, Pavel Haensel and I published in Physics-Uspekhi.

After receiving his Ph.D. from Harvard University, Gordon Baym came to Copenhagen, originally as a postdoc, and over the years has been a frequent visitor and Professor at NORDITA and an Adjunct Professor at NBI. His day job is Professor of Physics at the University of Illinois, Urbana. He is a theoretical physicist with unusually wide research interests, spanning condensed matter physics and statistical physics, including superfluidity and ultracold atomic physics, astrophysics, nuclear physics, and the history of physics. A pioneer in the study of neutron stars, and more generally the nature of the matter under extreme conditions of density and pressure, he has been a driver in studies of high-density matter in the laboratory using high-energy particle accelerators to recreate on earth, albeit briefly, the conditions in neutron stars and the early universe. He is the author of three well-known books, Quantum Statistical Mechanics (with Leo Kadanoff), Lectures on Quantum Mechanics, and Landau Fermi Liquid Theory: Concepts and Applications (with Chris Pethick). Baym has also made important contributions to the history of physics, most notably as a member of the International Project on the History of Solid-State Physics that published a monumental and authoritative book on the history of solid-state physics titled Out Of The Crystal Maze: Chapters from the History of Solid-State Physics. He is a member of the American Academy of Arts and Sciences; the U.S. National Academy of Sciences; and the American Philosophical Society; and was awarded the Bethe Prize, the Onsager Prize (with Chris Pethick and Jason Ho), and the Feenberg Medal.