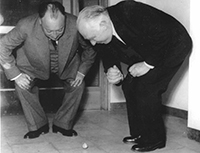 Henrik Zinkernagel, “Niels Bohr and the role of aesthetics in the development of quantum physics”

Scientists often invoke aesthetic language. They use terms such as beauty, harmony and wonder – not only to describe their finished theories and explanations, but also to express their motivations and passionate involvement in the scientific process.

In this seminar, I will report on an ongoing project of understanding the different roles of aesthetics in the historical development of quantum physics. I will give examples of the kind of aesthetic ideas which seem to have been important for the quantum pioneers, especially Niels Bohr, in relation to the notions of play, beauty, the sublime and the joy of insight. I will also discuss how aesthetic considerations were shared among physicists, and how they influenced different stages of the development, for instance in relation to stimulating interest in specific approaches, evaluating experimental and theoretical results and interpreting the quantum formalism.

I will finally address the relevance of aesthetics in today’s physics, and discuss possible implications (and potential dangers) of an increased emphasis on aesthetics in the context of science communication and education.

Henrik Zinkernagel is an Associate Professor at the Department of Philosophy at the University of Granada. He studied physics at the Niels Bohr Institute and holds a PhD in philosophy of science from the Center for Philosophy of Nature and Science Studies at the Niels Bohr Institute. His work has been centered mainly on the history and philosophy of cosmology, as well as on the history and philosophy of quantum mechanics (especially concerning the views of Niels Bohr). In recent years he is carrying out research on aesthetic aspects of science and the inclusion of aesthetics in science education.