Roberto Lalli, "Building a Scientific Community in the Post-WWII Era: A Network Analysis of the Renaissance of General Relativity." 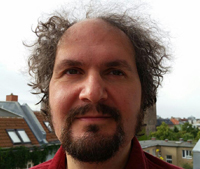