This year it is 40 years since the Nobel Prize in physics was awarded to Aage Bohr and Ben Mottelson of the Niels Bohr Institute, together with James Rainwater of Columbia University, New York City. 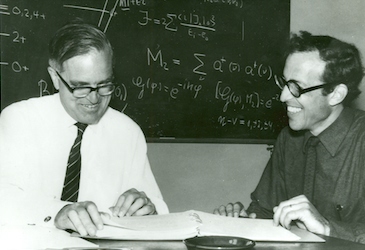 The Prize was given "for the discovery of the connection between collective motion and particle motion in atomic nuclei and the development of the theory of the structure of the atomic nucleus based on this connection". According to fellow physicist Ove Nathan, Bohr and Mottelson’s work in the 1950s heralded a second Golden Age at the institute comparable in importance to the Golden Age of quantum mechanics in the 1920s.

On 14 December the Niels Bohr Archive will celebrate the 40th anniversary of the Nobel Prize in the historic Auditorium A. There will be two main lectures:

Historian of science Helge Kragh has studied the history of 20th century physics extensively and will provide the historical background. Italy-based Argentinian physicist Ricardo Broglia worked closely with Bohr and Mottelson and was at the institute when the Prize was awarded. He will provide reminiscences from that time as well as discuss the relevance of Bohr and Mottelson’s work to this day.