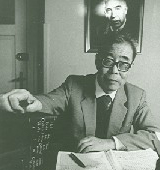 Until 2006, when the last volume of the original edition in English appeared, the Niels Bohr Collected  Works was published under the auspices of the Niels Bohr Archive (NBA).  In close succession to each of  these volumes the Chinese Professor Ge Ge translated them into his own language.  The Chinese edition  is the only edition of the Collected Works apart from the original one.  Professor Ge Ge was able to  translate the last volumes just before he died in 2007, whereupon a new full edition was published in China.

In order both to celebrate Professor Ge Ge’s great achievement and to make Bohr’s work available to a  broader Chinese-speaking audience, NBA and Confucius Institute have agreed to collaborate to donate  six sets of the Collected Works in Chinese to selected institutions.  The event is described in greater  detail on the CBS website here.  Please note that registration is required in order to participate in the  event.  We look forward to seeing as many as possible of you there.