An International History of Science Conference organized by the Niels Bohr Archive
Tuesday 11 to Friday 14 June 2013 at the Danish Royal Academy. 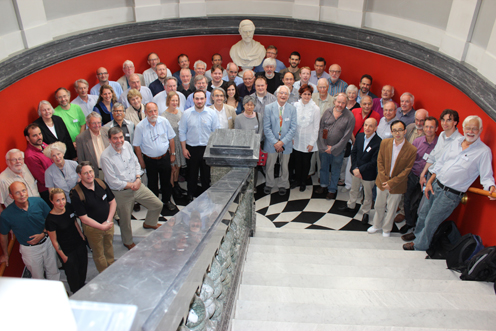 Conference participants at the stairs of the Royal Danish Academy of Science and Letters. The bust is of the founder of the Carlsberg Breweries, J.C. Jacobsen.

The conference was announced internatiionally as an event celebrating the 100th anniversary of the Bohr atom, wiith an invitation to potential speakers to contribute talks broadly relating to Niels Bohr's life and career. The programme for the conference, which can be linked to here (and which in turn includes links to most of the abstracts) reflects the response to this invitation. For printing purposes, you can also download the programme  and the abstracts as pdf files (both links open in a new window).

The conference was held in the traditional meeting room of the Royal Danish Academy of Sciences and Letters, H.C. Andersens Boulevard 35, near Tivoli in central Copenhagen. It was in this room that Niels Bohr led the meetings – with an interruption during the Second World War – as President of the Academy from 1939 until his death in 1962. The arrangement was covered in part by a generous grant from the Carlsberg Foundation.

John Heilbron's Opening Lecture, 11 June 2013, My courage is ablaze so wildly at the Danish Royal Academy of Science and Letters can be seen on YouTube here (both links open in a new window).

A larger version of the conference picture, is available here (opens in new window).

The proceedings have been published as; One Hundred Years of the Bohr Atom: Proceedings from a Conference, Finn Aaserud and Helge Kragh, eds. (Copenhagen: The Royal Danish Academy of Science and Letters, 2015). It can be ordered (by email) here and a review of the book can be read here (both links open in a new window).