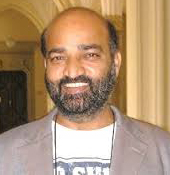 In 1930 the Nobel Prize for Physics was awarded to Sir C.V. Raman, while the Russians and Raman's co-worker were ignored.

In this lecture the reasons for this will be illustrated.