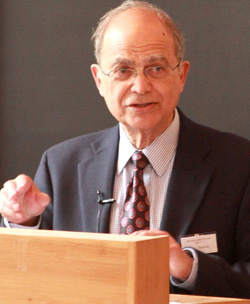 John Heilbron speaking at the celebration.

The Niels Bohr Archive (NBA) was formally established as an independent institution on 7 October 1985, which would have been Niels Bohr's 100th birthday. The 25th anniversary was celebrated with several lectures, which because of the great interest in the event were transmitted from the main auditorium to a neighbouring auditorium. Most of the speakers have kindly allowed us to provide links to pdf-files of their talks, either as the powerpoint presentations presented at the event or as manuscripts of what they said.

The announcement of the event on Niels Bohr Institute's website included a brief history of NBA (opens in a new window). At the same address photographs from the celebration can also be seen.