With the recent discovery that the universe is expanding at an accelerating rate, the so-called cosmological constant - the anti-gravity introduced by Einstein in 1917 to prevent his static massive universe from collapsing - is making a remarkable come-back. 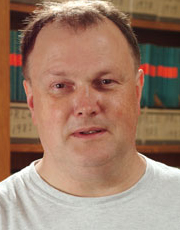 Michel Janssen, Center for Program in History of Science and Technology,University of Minnesota

In my talk, I want to show that Einstein's introduction of this constant, which he later allegedly called the biggest blunder of his life, had little to do with cosmology. It was part of the last of a series of failed attempts by Einstein to eliminate the notion of absolute acceleration from physics. As it happened, it took the Dutch astronomer Willem de Sitter only a few days to show that this latest attempt once again failed. After putting up a big fight, Einstein finally conceded the point about a year later, although he never publicly acknowledged that he was wrong and De Sitter was right. The year-long debate over this issue is a veritable comedy of errors involving not just Einstein and De Sitter, but also the great mathematicians Hermann Weyl and Felix Klein.

The great irony of the situation has always been that if Einstein had not added the cosmological term to the field equations of general relativity, his philosophical predilections would have led him to predict the expansion of the universe, more than a decade before Edwin Hubble produced convincing evidence for this idea. Given the latest developments, however, Einstein may have the last laugh.