Copenhagen and Beyond 1:
The Interconnections between Drama, Science, and History

Michael Frayn's play "Copenhagen", based on the war-time meeting between 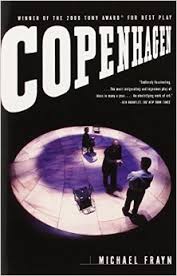 Niels Bohr and Werner Heisenberg, has both received high critical acclaim and become an extraordinary public success. This has been the case not only in London, where it played for more than a year and a half, but also elsewhere including Copenhagen itself, where at the time of this symposium it was showing at the Betty Nansen Theatre under the direction of Peter Langdal.

While emphasizing that he has written a drama and not a scholarly piece of history, Frayn based his writing on substantial reading and research in physics as well as history. It seemed therefore appropriate to bring together at the Niels Bohr Institute -- where Bohr and Heisenberg worked together for several years -- the author of the play (Frayn), its Danish director (Langdal), and a prominent historian of recent science with experience in translating history into dramatic form (professor Friedman from the University of Oslo). Following brief presentations from these three distinct perspectives, the audience will be invited to ask questions and participate in the general discussion. Transcriptions of the talks and the discussion can be read here.