Christoph Lehner, "The Resolution of the Particle-Wave Dualism: Pascual Jordan and the Quantum Field Theory Program."

Pascual Jordan was the early visionary of quantum field theory. The beginning of quantum field theory can be found in his proof in the "Dreimännerarbeit" that Einstein's mysterious formula for the wave and particle fluctuations of blackbody radiation can be derived from an application of the brand new matrix mechanics to the electromagnetic field. 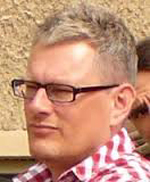 Christoph Lehner, Max Planck Institute for the History of Science

When Dirac showed an elegant way to represent absorption and emission of light through a quantization of field amplitudes, Jordan generalized his approach in a series of collaborative papers to a full quantum field theory of matter and electromagnetic field.

While a lot of the technical achievements were due to others (such as Oskar Klein, Eugene Wigner, Wolfgang Pauli, and Werner Heisenberg), Jordan seems to have been the driving force behind this program. He was certainly its most explicit spokesperson: In several non-technical papers, he developed an encompassing vision for its foundations and its goals.

I will present Jordan’s program, the striking difference between his and Dirac’s views, and the surprising contrast between Jordan’s foundationalist ambitions and his professed positivism. I will end with a brief outlook on possible relations between Jordan’s scientific views and his reactonary politics in Weimar and Nazi Germany.