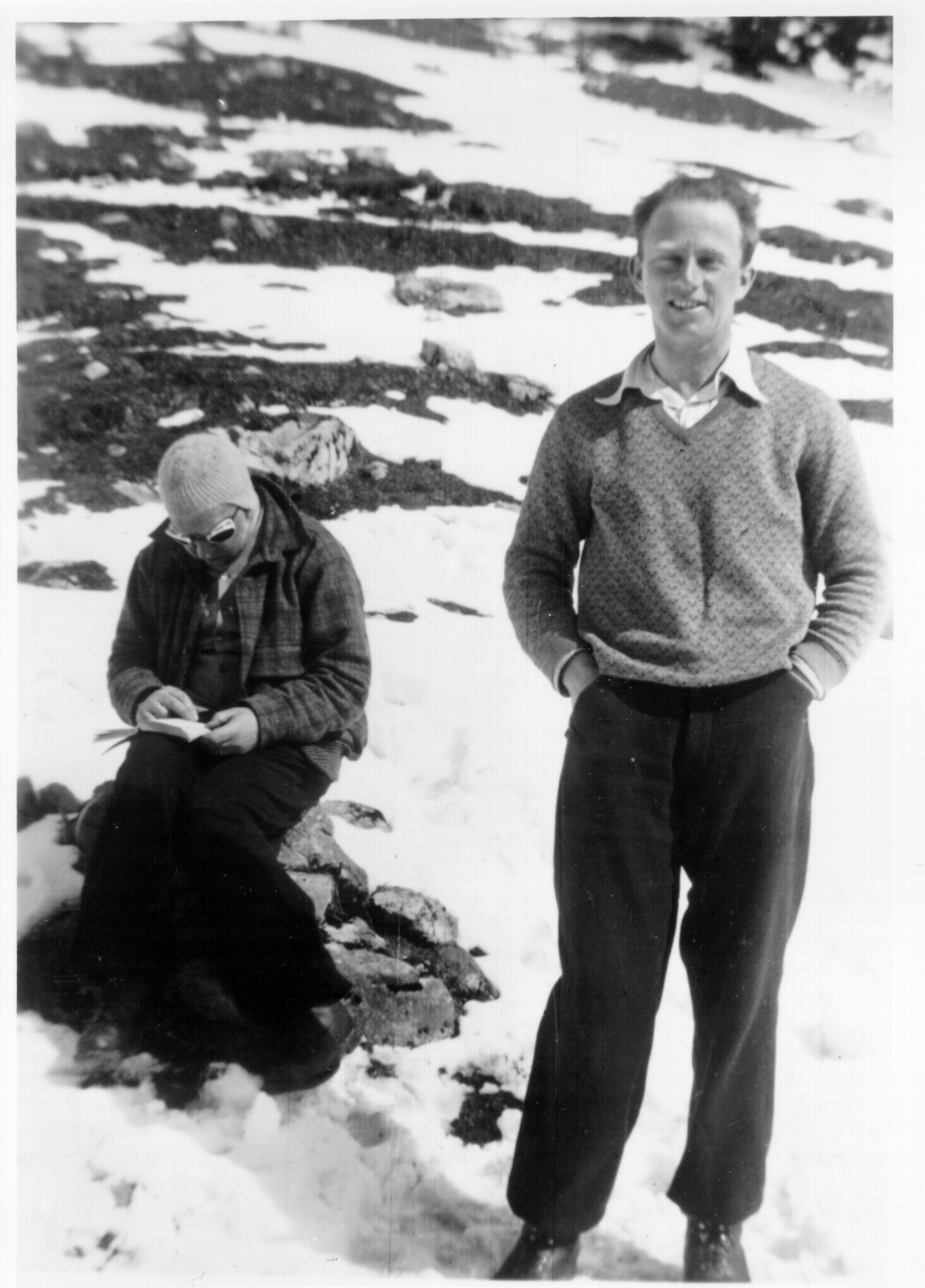 Bohr and Heisenberg together on a skiing vacation in Tyrol, 1932. As always, Bohr is taking notes.

A visit by the German physicist Werner Heisenberg to Niels Bohr in Nazi-occupied Denmark in September 1941 has recently become the subject of keen interest, not only among historians but also in the public domain. The interest has been spurred in particular by the drama “Copenhagen,” written by British playwright Michael Frayn, which takes the meeting between Bohr and Heisenberg as its point of departure. In particular, the play has renewed and strengthened an already intense debate among historians of science about why Heisenberg came to Copenhagen and what transpired at the meeting. In the course of this debate, reference has been made to a draft of a letter to Heisenberg about the meeting that Bohr never sent.

This draft is one of eleven documents deposited by the Bohr family at the Niels Bohr Archive a few years ago. The deposit comprises documents either dictated or written by Niels Bohr referring to the 1941 meeting. Apart from a letter received from Heisenberg, they are all draft letters or private notes never leading to a final product in the form of a letter that was sent or a any sort of publication. For this reason the documents were deposited with the clause that they would only be released in 2012, fifty years after Niels Bohr’s death. Until now, the only available discussion of the 1941 meeting stemming from the Bohr family has consisted of the article, The War Years and the Prospects Raised by the Atomic Weapons by Niels Bohr’s son, Aage Bohr, first published in 1964.

In order to accommodate the present interest and to avoid undue speculation about the contents of the draft letter, the family has now decided to remove the fifty-years clause for the deposit. The material, covering the period from 1957 to 1962, is presented on this website in high-resolution black-and-white facsimile reproductions of the original documents, original-language transcriptions and English translations. By making the documents accessible on the Internet we forgo the normal archival practice of making material available to scholars on application. This decision has been motivated by the high level of interest as well as the wish of the Bohr family to present the material as a whole, in order to avoid further misunderstanding about its contents. However, the release is subject to normal copyright rules, which means that permission to publish quotations from the material must be obtained in writing from the Niels Bohr Archive.

The Bohr family’s decision to release documents originally covered by the fifty-years clause is not unprecedented. In 1998 the family decided to make available parts of the family correspondence as well as the Bohr Political Papers documenting Bohr’s efforts during and after World War Two towards establishing what he termed an “open world” between nations. The latter collection includes a document, dated 21 March 1954, in which Bohr gives a brief description of his 1941 meeting with Heisenberg.

"Brighter than a Thousand Suns"

The first document in the current release is the draft letter mentioned at the outset. It would appear to be a direct reaction to a letter from Heisenberg to the journalist and author Robert Jungk, in which Heisenberg describes his 1941 meeting with Bohr. Jungk published an extract of Heisenberg’s letter in later editions of his book Brighter than a Thousand Suns, which was originally published in German in 1956. The draft letter was found some years after Bohr’s death in his personal copy of the Danish edition of the book from 1957, where the extract of Heisenberg’s letter to the author was published for the first time.

The released documents can be roughly divided into four categories. The first category consists of a single document (Document 1), namely the one that was found in Jungk’s book. It stems from late 1957 or early 1958. The second category, consisting of Bohr’s drafts of letters (and one letter from Heisenberg) in connection with Heisenberg’s 60th birthday on 5 December 1961, refers only peripherally to the 1941 meeting. There are four documents in this category: two drafts of congratulatory letters (Documents 2 and 3), Heisenberg’s response (Document 4) and a draft of a thank-you letter to Heisenberg’s response (Document 5). Incidentally, the Niels Bohr Scientific Correspondence (BSC), which has been open to scholars since the 1960s, includes another draft letter congratulating Heisenberg on his birthday quite similar to those in the current release. The BSC furthermore contains a telegram written for the same occasion. Dated 4 December 1961, it seems to be the only one of Bohr’s greetings that was actually sent, and hence the one that Heisenberg responded to. The remaining two categories consist of handwritten notes (Documents 6, 8 and 9) and draft letters to Heisenberg (Documents 7, 10 and 11), all seemingly from the last two years of Bohr’s life and all addressing the 1941 meeting in some detail.

Our attempt at a chronological presentation of the documents is not quite certain. Moreover, the contents of the material should be viewed with caution. All documents were written sixteen years or more after the event they seek to describe. Furthermore, as already noted, all of the ten documents created by Bohr were drafts and notes, which makes them difficult to interpret. Finally, even though the documents show a genuine concern on the part of Bohr to formulate his own recollection of what transpired in 1941, most – if not all – of them were written as reactions to the writings or questions of others and do not reflect Bohr’s main interests and activities at the time. The repeated misdating of the meeting testifies to this. 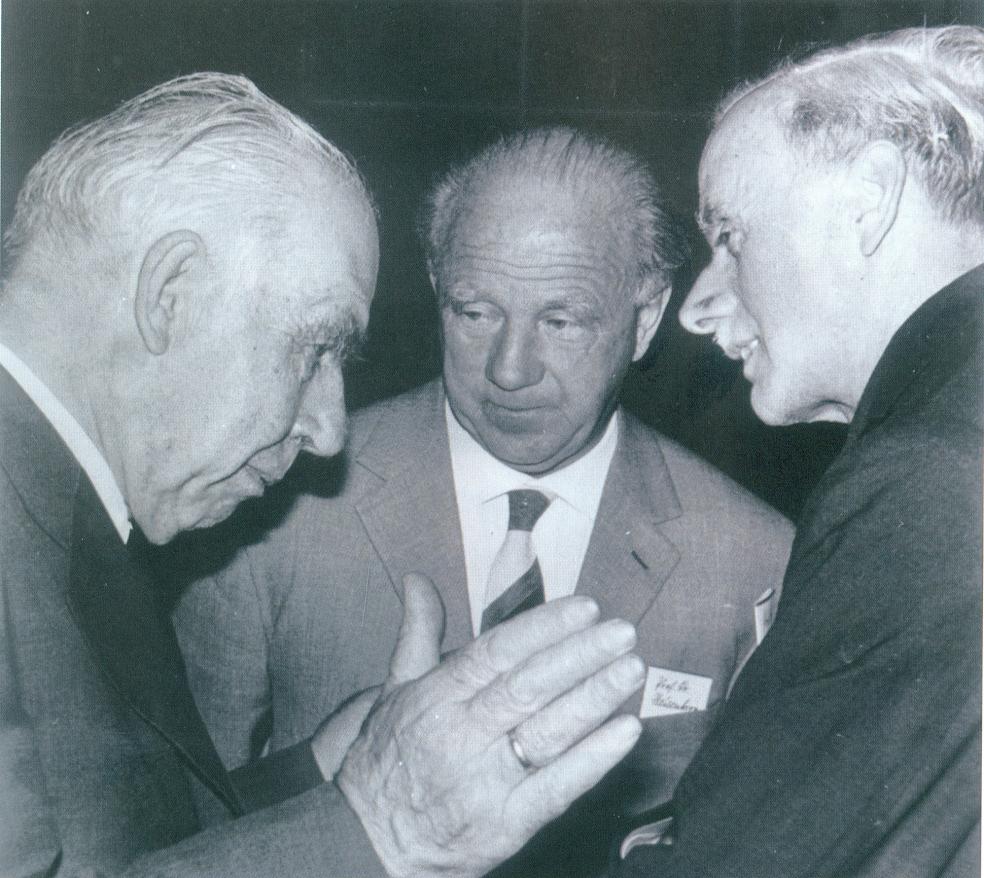 Heisenberg and Paul Dirac listen to Niels Bohr in Lindau, 1962.

Full transcriptions and translations have been provided for all the original material, even in the two cases (Documents 5 and 11) where a document exists in two or three separate but quite similar versions. Passages struck out in the original documents have not been transcribed or translated; they can be consulted in the facsimiles. Both in the transcriptions and the translations, handwritten insertions in typewritten text and additions to handwritten text in a different handwriting are indicated by enclosing them in angular brackets, “<>.” In a few cases, additional words or passages have been added for meaning; these are enclosed in square brackets, “[].” A minor number of misspellings have been corrected, notably the name “Weizsäcker.”

The translations have been carried out by Felicity Pors and Finn Aaserud at the Niels Bohr Archive in collaboration with Andrew D. Jackson and Karen Jelved. As with any translation, the precise choice of corresponding words and phrases has been difficult, a difficulty which is enhanced by the documents being unfinished notes and drafts. Therefore, although all possible care has been exercised in providing faithful translations, close attention to the original documents is strongly recommended.