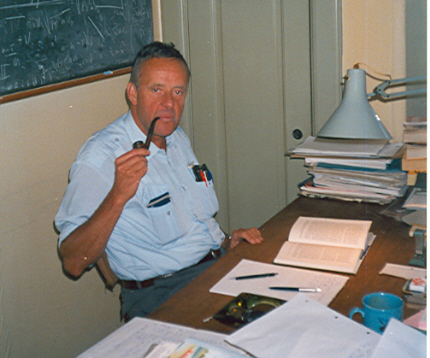 Erik Rüdinger in his office at the Niels Bohr Archive.

Erik Rüdinger, the first director of the Niels Bohr Archive (NBA), has passed away after a long and severe illness.

Erik completed his physics studies at the University of Copenhagen in 1960, and served as Niels Bohr’s scientific assistant until Bohr’s death in November 1962. In 1963 he became scientific assistant at the NBA under the leadership of Léon Rosenfeld, the first general editor of the Niels Bohr Collected Works. Erik’s interests and activities, however, went much beyond Bohr and physics, including in particular a genuine concern for the developing countries. Between 1965 and 1977 he spent long periods in Nigeria and Brazil as a much devoted physics teacher at universities there. Erik was the natural choice as Rosenfeld's successor as leader of the NBA and general editor of the Niels Bohr Collected Works. He assumed this position in 1977.

Until 1985 the NBA was not a formalised institution, existing essentially as a place to prepare the publication of the Collected Works, with funding from the Carlsberg Foundation for this particular purpose. Volume 5, published in 1984, was the first under Erik’s direction, and three more volumes (6, 8 and 9) came out during his tenure. He worked closely and diligently with the various editors chosen for the individual volumes. With his love of teaching, he also found time to give an introductory course in quantum physics at the Niels Bohr Institute using, instead of the usual textbook, the original papers by the pioneers of the early years. There proved to be little time and opportunity under these circumstances to help the many researchers asking to consult the substantial archival resources housed here. This situation improved when the NBA was formally established in 1985 as an independent institution with limited funds provided by the Danish Ministry of Education. When Erik left the NBA in 1989 he had not only succeeded in publishing four volumes, but had also done initial work as regards the contents of the remaining volumes (7 and 10–12) of the Collected Works.

The reason for Erik’s departure from the NBA was his successful application for a post combining his interests in science and developing countries. It involved responsibility within the Danish Foreign Ministry for aid to build up science in developing countries and included travel to the countries in question.

Erik’s hopes for a long retirement in which he could concentrate on his literary and other interests and fully enjoy life with his wife, Ellen, their children and grandchildren, were not to materialise. After happily returning to teach his physics course at the Niels Bohr Institute in 2001 and 2002, he was struck by illness. While weakening physically, he remained alert, heroically continuing to check translations and provide useful advice even in the final stages of the preparation of the Bohr Collected Works, the last volume of which, to Erik’s delight, was published in 2006.

Erik distinguished himself by his lack of interest in personal gain, being naturally interested and curious in whatever issue he touched upon. Throughout his life he had a warm sense of humour and remained a child at heart. It is a privilege to have known him.